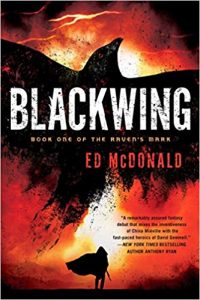 Hope, reason, humanity: the Misery breaks them all.

Under its cracked and wailing sky, the Misery is a vast and blighted expanse, the arcane remnant of a devastating war with the immortals known as the Deep Kings. The war ended nearly a century ago, and the enemy is kept at bay only by the existence of the Engine, a terrible weapon that protects the Misery’s border. Across the corrupted no-man’s-land teeming with twisted magic and malevolent wraiths, the Deep Kings and their armies bide their time. Watching. Waiting.

Bounty hunter Ryhalt Galharrow has breathed Misery dust for twenty bitter years. When he’s ordered to locate a masked noblewoman at a frontier outpost, he finds himself caught in the middle of an attack by the Deep Kings, one that signifies they may no longer fear the Engine. Only a formidable show of power from the very woman he is seeking, Lady Ezabeth Tanza, repels the assault.

Ezabeth is a shadow from Galharrow’s grim past, and together they stumble onto a web of conspiracy that threatens to end the fragile peace the Engine has provided. Galharrow is not ready for the truth about the blood he’s spilled or the gods he’s supposed to serve.

This was my first dive into the “grimdark” genre, so I don’t have others to compare it to but I did really enjoy it!

That said, the first part of the book felt slow and I wasn’t really interested or invested in any of the characters. But around page 60-70 things started to pick up, and from there the momentum built really well. I’m not sure if I ever really cared about any of the characters, but I was definitely interested in them – to know their story and see how they develop – which made me invested and helped pull me into the story more.

This is not a happy world. It’s grim, and dark (as you would expect), and has an air of hopelessness, but also strong, driven characters who are that way because of the world they’re in. I liked that everything was matter of fact, pragmatic, with no sugar coating. And also that you were shown the world and characters gradually – to make your own observations along the way – and not just told what you needed to know as an info dump.

Some of the station locations, and distances/time in general, were a bit confusing to keep track of but it didn’t detract from the story. A map might be helpful for the front of the book though, to get a better idea of where everything is in relation to everything else.

I really liked that there were 2 things at the end which I didn’t see coming (2 others that I did, not because they were cliche, but because the story built up to them well), and I like having surprises.

I purchased this book with my own money, and received no compensation for my honest review.
* I am an Amazon associate, and Book Depository associate, which means if you purchase the book through my link, Amazon/BD will give me a small commission (it does NOT affect the price of the book).