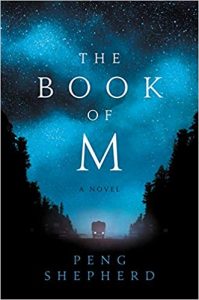 The Book Of M
by Peng Shepherd

One afternoon at an outdoor market in India, a man’s shadow disappears—an occurrence science cannot explain. He is only the first. The phenomenon spreads like a plague, and while those afflicted gain a strange new power, it comes at a horrible price: the loss of all their memories.

Ory and his wife Max have escaped the Forgetting so far by hiding in an abandoned hotel deep in the woods. Their new life feels almost normal, until one day Max’s shadow disappears too.

Knowing that the more she forgets, the more dangerous she will become to Ory, Max runs away. But Ory refuses to give up the time they have left together. Desperate to find Max before her memory disappears completely, he follows her trail across a perilous, unrecognizable world, braving the threat of roaming bandits, the call to a new war being waged on the ruins of the capital, and the rise of a sinister cult that worships the shadowless.

As they journey, each searches for answers: for Ory, about love, about survival, about hope; and for Max, about a new force growing in the south that may hold the cure.

I thought The Book of M sounded intriguing – people losing shadows and gaining strange powers – and it didn’t disappoint! We follow the story from three viewpoints: Ory, Max, and Naz. I found Naz the most personable of the three, but enjoyed reading the story from all of the vantage points.

Peng Shepherd has a really good writing style, in my opinion. The descriptions felt like I was there, and the build up to tense, happy, or devastating moments was done really well – I can’t give specifics because of spoilers, but there are several scenes that made me clench my fists, or feel such hatred towards characters who until that moment I had thought of very differently. Everyone in the book has depth, and I found myself often asking “What would I have done in this situation?” or “Would I have done things differently?” whenever decisions came up.

The world building is immense – we follow the story across several states in America, being shown different land marks, and general travel sights that are normally familiar but subtly changed to immerse us with fantastical discoveries as the characters themselves are discovering them. It gave me a feeling of “We’re all in this together” no matter where the story led.

I really enjoyed learning about what was happening to the people who were inflicted with the loss of their shadow, and how it was affecting not only the people they knew but the world as a whole. It felt very realistic in how everyone reacted at different times through the news cycle/timeline.

SPOILERS BELOW! Don’t read the following two paragraphs if you want to avoid spoilers!

I did feel the book was lacking in one respect though – it relied too heavily on the “it’s magic” defense for why everything happened, and felt like it was trying to distract the reader from wanting to know reasons by making the characters ultimately not care about reasons either. Even the scientists and research that was mentioned throughout the book was brushed aside by the end for a heavy push of “We don’t really need to know why, it’s just magic!” and that was disappointing and felt a little like a cop out.

Also by the end I felt like everyone forgot that paper journals were a thing (I doubt stationary stores had been raided much and were likely fully stocked and ready to go).

(No more spoilers from this point on).

But that said, I still really enjoyed the book and have already been recommending it to friends.

I purchased this book with my own money, and received no compensation for my honest review.
* I am an Amazon associate, and Book Depository associate, which means if you purchase the book through my link, Amazon/BD will give me a small commission (it does NOT affect the price of the book).