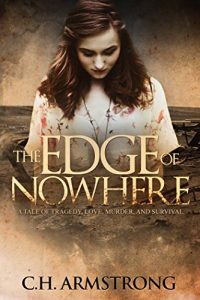 The Edge of Nowhere by C. H. Armstrong
Amazon

The year is 1992 and Victoria Hastings Harrison Greene—reviled matriarch of a sprawling family—is dying.

After surviving the Oklahoma Dust Bowl and the Great Depression, Victoria refuses to leave this earth before revealing the secrets she’s carried for decades.

Once the child of a loving family during peaceful times, a shocking death shattered her life. Victoria came face to face with the harshness of the world. As the warm days of childhood receded to distant memory, Victoria learns to survive.

No matter what it takes.

To keep her family alive in an Oklahoma blighted by dust storms and poverty, Victoria makes choices—harsh ones, desperate ones. Ones that eventually made her into the woman her grandchildren fear and whisper about. Ones that kept them all alive. Hers is a tale of tragedy, love, murder, and above all, the conviction to never stop fighting.

A friend on twitter recommended this book to NetGalley users, and the description sounded interesting so I requested it. It was labelled as “women’s fiction” but really I think it’s historical fiction foremost. I wish I’d realised that before requesting it, as I’m not a big fan of historical fiction. The description made it sound as though the story was set in 1992, but in reality it’s all set in the past – from 1913 to 1939.

The Edge of Nowhere is a narration of the protagonist, Victoria’s, life. What I mean by narration is that the whole book read very much as telling instead of showing – which is a big no-no in the writing world – and I felt more like I was reading a padded out list of events. There wasn’t any “showing” to help me become immersed in the story, and each character and situation felt flat because of it.

The story starts with the protagonist saying this is a letter to her family so they can understand what she went through, and it ends in much the same way. But at 358 pages I think it could have been better executed as a brief letter at the start saying something like “the following is a book about my life, for my grandchildren” and then show us her life instead of just telling us a series of events. (It’s pretty unbelievable that she wrote a 358 page letter lol!)

On top of the “telling instead of showing” issue, the dialogue wasn’t very good, in my opinion. Every character sounded the same as the rest (you could make a drinking game for whenever anyone said “I don’t have much but I can share”). And confusingly, at the start of the book Victoria (and her family) seemed to speak with a mostly “proper” accent, but as the book went on the author changed the way Victoria and everyone around her spoke, giving them more of a drawl including missing letters from words. This change seems to be trying to drive home that Victoria wasn’t from an affluent family, but it was inconsistent with how the story started.

Which also caused some confusion for me because at the start of the story I thought she was living in a Victorian affluent setting, due to the names and how everyone was speaking and interacting, but also the way certain characters finances were talked about. Will, in particular, was made to sound like a very wealthy gentleman at first, but within a couple of chapters they were talking about how much of a hard working farmer he is and about what little money they made from even great farming years.

The writing style as a whole made it a struggle to get through the book, which is a shame because the idea for the story is a good one and the topics covered are important things that should be discussed – not just from history but in modern day too. Topics such as starvation, misogyny, sex work (the book briefly touches on this), survival, infant death, and grief.

Victoria goes through a vast list of trials and suffering. I felt angry at everything she had to endure, but at the same time I didn’t actually care about Victoria at all. Her character – even though her demeanor changed through the book – fell flat for me. I like to see character development that actually develops the character in a way that shows us the changes, and doesn’t just write the character telling us how they changed.

I wouldn’t recommend The Edge of Nowhere to anyone but, as I hadn’t ever heard of the Oklahoma Dust Bowl before, I have learned something from reading this book. And even though the “telling” and dialogue were a struggle to get through, I do feel as though I’ve learned a little about what it was like for some families during that time.

Due to learning something new, my rating isn’t as low as it would have been.