I was almost tempted to say the past week had been uneventful, but that’s not really true. It’s just been a more chilled out kind of event filled week, instead of the manic weeks I seem to have had a lot of lately!

It started off great when I found out The Library Project wanted my face. Ok let me back up a bit here lol! I recently wrote a blog about my favourite childhood book to help promote The Library Project – an organisation which donates books and libraries to children in under-financed rural schools and orphanages in Asia. When they first reached out to bloggers to help promote their organisation I jumped at the chance!

Well now they want to grow that into even more bloggers being part of it and have set up a specific section of their website…which now has my face (and the other bloggers who took part in the original blog posts) on it! 🙂 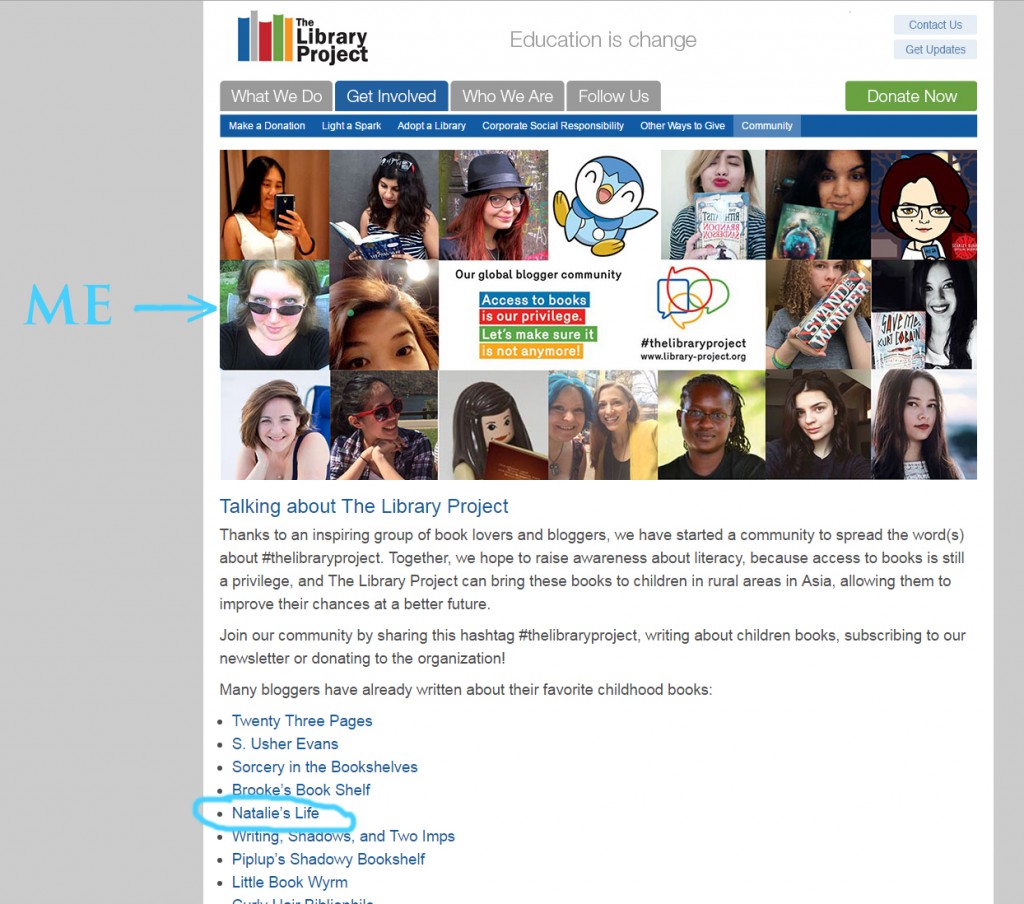 For any bloggers interested in joining in the fun and helping to spread the word about the organisation, there are full details on The Library Project website on how to take part. 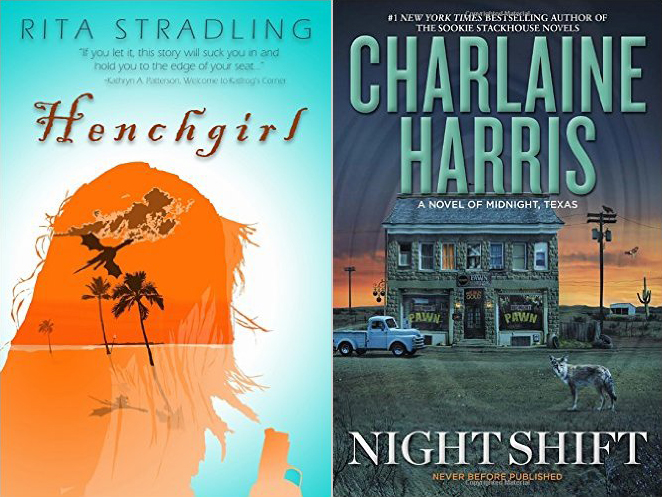 I also got a few of ebooks from NetGalley – my first time ever requesting from them! I was rejected for several, which I expected, but I got approved for a handful of titles so now I’m working my way through them. I’ve written a review for Henchgirl already, and am about 75% of the way through Night Shift. 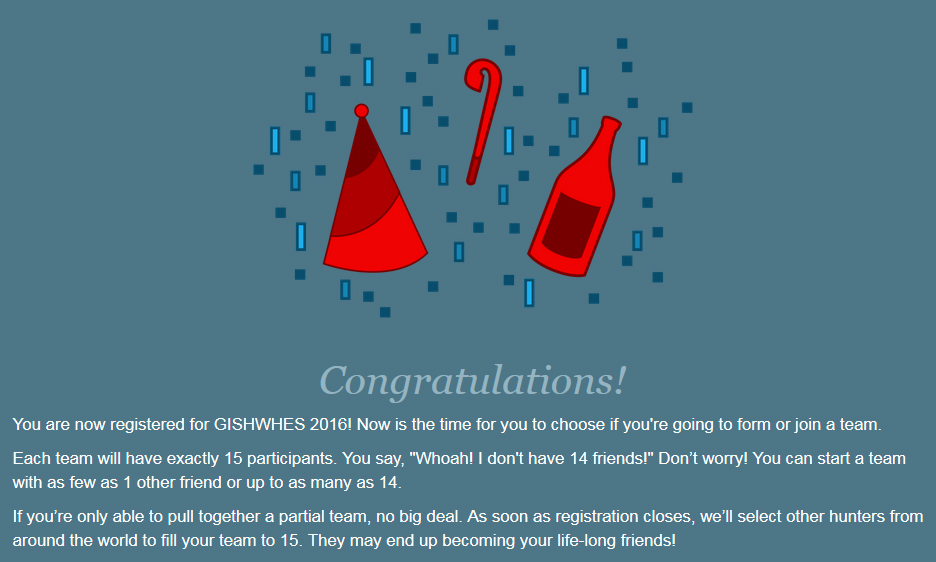 Then some online friends told me about something called GISHWHES. I’d never heard of it before! It’s an annual “scavenger hunt” run by Misha Collins (who plays Castiel on Supernatural), where teams work to complete fun and creative challenges. You don’t have to live local to anyone on your team (I don’t!) and you can create your own team or join a team of random people to get to meet new friends.

From what I can tell, there are a LOT of different challenges and you just do as many as you can – they vary from something simple (like taking a photo with a stormtrooper) to something really hard (like writing GISHWHES in space!). The aim of the hunt isn’t just a creative outlet though, it’s also to help and inspire others in your community.  It sounded like way too much fun to pass up so I’ve registered 😀 The hunt starts in July – I’m a bit nervous but definitely excited!

Finally, it was Penny’s “birthday” yesterday! She turned 2-ish. It’s been a year since we took her in and I can’t believe it’s been so long already. She definitely feels like she’s been part of the family for way longer than that! 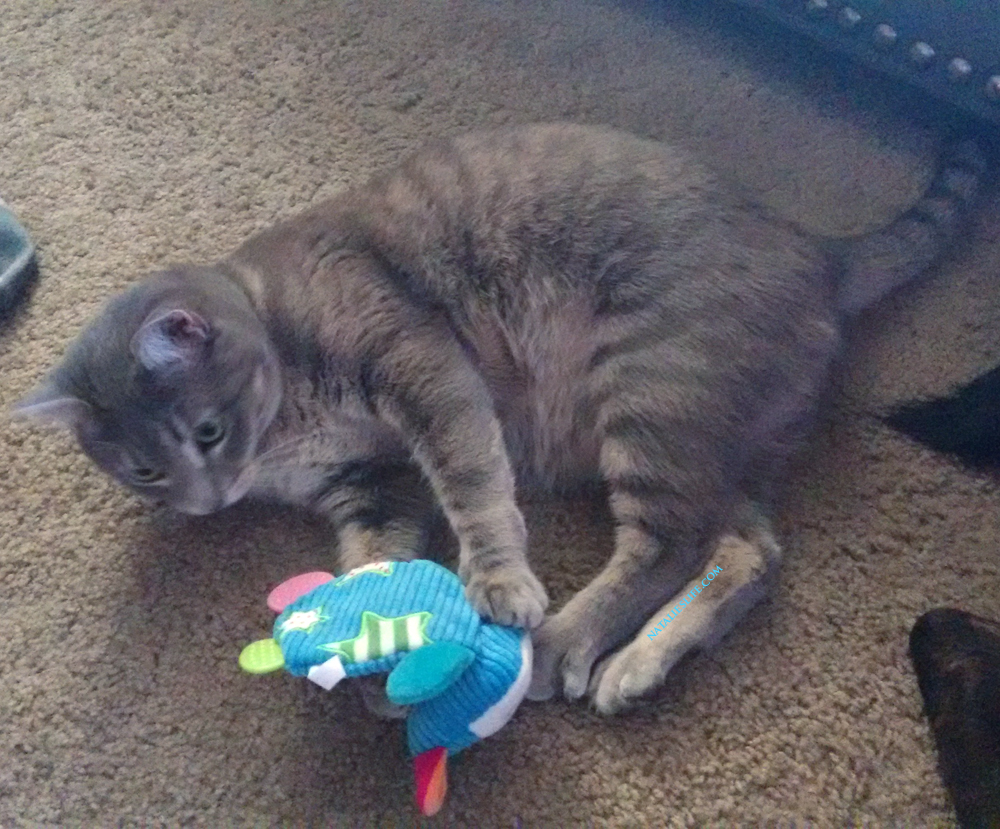 I made a vlog about some of these things (and other bits going on in my life) while the dog and cat are crazy in the background lol!

I received the ebooks via NetGalley, and received no compensation for my honest opinion.
I am an Amazon Associate: they pay me a small commission if you use my link. 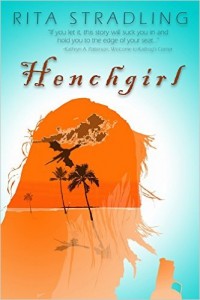 The children of dragons and humans, the dracons, control eighty percent of the world’s governments. Humans worldwide are either subservient or prey. On the small vacation island of Mabi, humans call for war.

Sixteen year old Dakota Kekoa lives a double life. By day, she pretends to be a human to infiltrate Mabi Academy, a ‘human’s only’ high-school. At night, she works as a henchman for her draconic mafia family, utilizing her ability to steal and manipulate emotions.

Dakota’s life is not ideal but it is manageable, until the rich and famous half-dragon, Wyvern Manderson, shows up and starts sabotaging Dakota’s missions. And for some bewildering reason, he is always angry at her.

Within days of Wyvern’s arrival, Dakota is suspended from future missions and in desperate need of money. When Wyvern offers to hire Dakota to find his kidnapped human half-sister, she accepts despite knowing she’ll have to spend all day, every day, with Wyvern and his gigantic ego. This is not just any mission though; she is diving head first into the escalating conflict between humans and dracons. As more girls disappear and some are discovered dead, Dakota realizes her first honorable mission may also be her last.

I received an e-copy of this book via NetGalley – my first book from there! My views and opinions of the book are my own, and I received no compensation for my honest review.

Henchgirl is a fantasy/YA novel, and the first book in the Dakota Kekoa series. I hadn’t read anything by Rita Stradling before, but the description about dragons (who doesn’t love dragons?!) and the gorgeous island-themed cover made me want to dive right in.

The story follows a 16 year old dracon girl, Dakota Kekoa, who works for her Grandfather as something of a collections agent. She is part dragon (as are most of her family) but her ability is particularly useful as she can manipulate souls. I hadn’t ever seen that in a book before so it was an interesting plot point!

She uses her ability to be able to remove emotions from people, or add them, for example adding fear into someone she’s trying to intimidate for her Grandfather, or removing doubt from someone to make a deal. Her gift has it’s limitations and I enjoyed seeing how Dakota dealt with those and how her family had worked to make the most of even the negative aspects of her ability.

The novel is set in the fictional islands of Mabi (which were very clearly based on Hawaii) and I really enjoyed reading about somewhere different from the usual states/cities you see in fantasy/YA novels. The cover (shown above) is also a gorgeous representation of this, however that’s the paperback cover. The ebook cover seems to have been a little whitewashed – Dakota often talks about her darker skin tone, dark eyes and hair, yet the ebook cover has a very pale white girl with light brown hair – I’m not sure why the beautiful island cover isn’t used for both versions.

That aside, I really enjoyed reading this book! The dragon “history” was unusual and interesting. For example: dragons can’t stay on the earth’s surface for long because it’s too cold for them, they live far underground near the earth’s core. There are a lot of strengths with full dragons, and part-dragons, but also a number of weaknesses and I enjoyed that balance.

Dakota is a character who I think will develop more as the series progresses. I kept having to remind myself that she was only 16 because she got a little annoying at times with her thoughts or reactions. Especially when you team it with the fact she’d been working as a henchgirl for her Grandfather for several years, yet she didn’t seem prepared at all for taking/following orders or making logical conclusions over some situations (no spoilers). But as I said, she is only 16 so reminding myself of that helped a little to ease the frustrations.

Wyvern is a character I also want to see more of. He’s interesting but has a lot of negatives – he’s the pushy/dominating/controlling kind of man I don’t find attractive at all nor want to read about. But his character does seem to be changing and “learning” as he goes, so I’m actually really interested to see where his character ends up.  Hopefully it will be a case of him changing the way he does things because he realises women aren’t objects, and not just him changing only to please one girl.

The romance elements got heavier and heavier through the book. At first the story was a fun fantasy read, but ended up feeling more like a romance novel. So I’m keeping my fingers crossed that the romance doesn’t become the main story – I want to read more about the girl with the interesting talent, and her siblings (who also have talents of their own), and learn more about the dragons, with the romance as a subplot not the main plot.

There were quite a few open ended plot points that I hope get answered in the next book. Specifically about Dakota’s father, something that was given to her at the end of the book (no spoilers), and why Wyvern is how he is (and why her Grandfather knows). Hopefully these get more weight to them than the romance.

The pace of the novel is a bit slow at times – I felt a couple of scenes were padding that weren’t really needed and the main plot became a back story. For trying to save someone’s life, and rescue someone in possible mortal danger, they sure do have a lot of fancy dinners and not seeming to care about saving lives until after the dinner has ended. But the plot does move at a nice pace for the most part and kept me guessing at a couple of things, which is always fun!

I definitely enjoyed the book 🙂 It was a fairly quick read and a world I definitely want to read more of. I’m keeping my fingers crossed the series stays on the fantasy track and doesn’t become mainly romance.