I’ve been into gaming as far back as I can remember. Even before I went to first school (younger than 4 years old) I was playing computer games – I was lucky that my Dad was really into technology and we had a home computer. I remember getting into gaming with the Zork series of games – the text based ones and then the excitement when they released ones with actual graphics!

Ok now I’m just sounding old. What I’m trying to get at is that gaming has always been something I’ve enjoyed, but I haven’t done as much as I’d like to over the past few years.

The Steam Winter Sale this year isn’t as good as I remember it being in the past, but I still got a few goodies. One of which was The Beginner’s Guide, made by the same creator as The Stanley Parable (which I have and still haven’t got round to playing yet!).  The trailers looked intriguing, and the reviews made it sound like a game I’d enjoy, so I bought it. (As of posting this review it’s only $5.99 in the sale.)

I will say this isn’t a game for everyone. In fact it seems to be a “Marmite” kind of game – where you either love it or hate it, there’s no middle ground. I enjoyed it (which I’ll come to in a minute) and would recommend it if you’re intrigued, but if you’ve seen the trailers/reviews and don’t feel totally sure about it then I’d recommend watching a “let’s play” or buying it when it’s really discounted.

I wrote a review on Steam and that’s what I’m posting below. It doesn’t contain any spoilers.

I was really intrigued by the trailers and reviews, and was excited to play this game. However, I was only 5 minutes into it before I got severe motion sickness. I don’t normally experience motion sickness in games (the last one that caused it was Hexen) but this one got me bad.

I didn’t want to give up on the game though because of being so curious about it. So I got my husband to play it while I sat as far away across the room as possible (a trick to stop gaming motion sickness, I was told). It helped and I got to watch the game being played – and have some input – without feeling ill.

To put it simply: It is a narrated series of mini-games/maps that tells the tale of two friends.

To go more in depth… I think would give away too many spoilers. This is a game worth experiencing for yourself. It didn’t make me cry, it didn’t make me question my existence (as it has for others), but it is ultimately a narrative about…well…life, I suppose. Or more specifically about how we look at and meddle in things without seeing the bigger picture.

But it also isn’t about that at all.

It works very well as a thought provoking game, and each of us who play it will follow those thoughts to a different path and ending. And that’s ok. That is, I think, the point.

I wasn’t sure how to rate this game right after my husband finished playing it in front of me, but letting it settle in my mind for a while has definitely shown the game to be more thought provoking than I first thought. I wish I could play it myself.

It’s a really hard game to review without giving away spoilers! Pretty much every part of the game intertwines to give away little bits of information for you to think about and piece together later. Which I enjoyed a lot, but not everyone gets the same experience.

I purchased this game with my own money, and received no compensation for my honest review.

I love Chinese food. Growing up we used to go to Chinese restaurants almost every week, sometimes more than once a week! ..the authentic ones, not the fast-food take-out places.

So I’ve grown up with dim sum being a huge part of my diet and even now get cravings and have to run into town to satisfy them lol! One of my favourites is ha gow (prawn dumplings) and 2 days ago when shopping I found some pre-packed in a local supermarket! Now they may not be as good as the freshly made ones in the restaurant I grew up visiting (and still go to now) but they looked tasty so I bought 2 packets and some vegetable dumplings too.

With them in mind I decided to cook a Chinese inspired meal last night, from the top of my head, and dust off my wok that I don’t use nearly as much as I should. Here’s the recipe, there’s a couple of alterations I’ll make next time (a bit more honey and soy sauce) but overall it was really delicious 🙂

I started by chopping all of the vegetables while the wok heated up with a little bit of oil in. 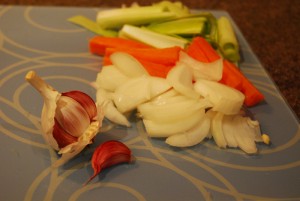 I cooked the garlic in the oil for a little while, to flavour it, then added the onions and cooked until they started to soften.

I cooked it like this for a few minutes, stirring to mix everything well, then served in a dish with the dumplings (which I steamed) on the side 🙂 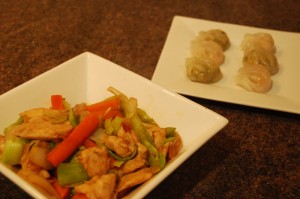 It was so simple to do and tasted great – when I do it again I’ll add a little more garlic I think and play around with the quantity of soy sauce and honey, because it could have taken more of each of those quite easily.

This will be my post for this week’s Hearth And Soul Blog Hop 🙂 I had so much fun last week I just had to take part again!