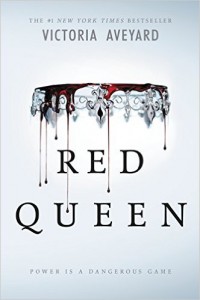 I’ve been looking forward to reading Red Queen by Victoria Aveyard. All of the book bloggers, and booktubers, have been talking about it so highly, and as I picked it up to read I began to worry it wouldn’t live up to my expectations. I needn’t have worried.

I really enjoyed this book! The world building is great, the characters are interesting, and the story moves with a great balance of fast and slow pacing. Not everything is perfect – the science behind some things made the logical part of my brain shudder, but it’s a fantasy book and nothing was so outlandish to shock me out of the story.

The main character, Mare, is part of the lower level of society – the red bloods. They are normal humans without any powers. The higher society – the overlords, really – are silver bloods (literally) and the elite classes of the world. They each have different powers, such as being able to manipulate fire, water, or turn invisible.

Mare’s world is turned upside down when she finds out she, a normal red blood girl, has a power of her own. The book delves into what this means for society and how it would shake up the current class dynamics. It made me think “what would I do in that situation?” a lot, and the plot develops in a very real-world way.

I liked Mare as a character, though she did frustrate me at times. But I kept reminding myself that she is only 17, and the book shows us that she hasn’t had much of an education. The other main characters include Maven and Cal, two of the silver elite class who are half-brothers. They stand alone well as different characters (not just one brother repeated twice) and I enjoyed the interactions between them and with Mare.

There were a couple of frustrations that seem to pop up in a few books lately. Such as someone being charged with something they didn’t do, and when everyone turns against them they don’t just say a simple one line to clear their name (I won’t say what sentence they could be here, because of spoilers). They just stay quiet and internally wonder “if only I could do something”. In this book their silence moves the story along to the next big scene, but it felt more like we were being forced to the next big scene when one sentence could have so easily changed things. It felt as though the character was suddenly being very slow in their thinking, which didn’t mesh with the way the character had been developed so far.

There were a couple of inconsistencies…or at least they read as inconsistencies but one of them could possibly be developed/answered in further world building in other books. The first inconsistency was that Mare talks about being quick on her feet and able to move around people well without bumping into them, but she slips on a stone floor (and says something about not having good feet for that), and later struggles to dance because her feet aren’t suited to it. The other inconsistency, which I think might be expanded upon later, was that powers are an ability to manipulate external things, not to come from within – which makes sense but got me wondering about the people who could heal themselves (but not others), the ones who can turn invisible, or the person who turned themselves to stone – those all read as internal manipulation, which goes against what the author had already taught us about powers. I hope these get answered or expanded upon in later books as I’d love to see more of that development! 🙂

Minor frustrations aside, I thought the characters were well rounded and the story was very interesting. I liked that there wasn’t such a clear line between good and evil in each person – the good characters weren’t always good, for example. It made the world feel very believable because of that, as people aren’t just one clear cut thing in real life.

There are a few plot twists and turns. The “big one” I figured out very early on in the book, but even knowing what was coming I really enjoyed this book! I loved the world building and definitely want to read more – I’ll be picking up the next book as soon as I can.